The Nigerian film and television industry would be incomplete without the likes of Melvin Orji, who contribute greatly to the second biggest film industry in the world.

Melvin Orji is an actor, film director/producer known for his impressive roles in numerous TV commercials and films. When he’s not acting, Orji takes his time to finetune the skills of other young Nigerians through his humanitarian contributions. Following his impressive achievements on-screen and off-screen, Guardian Life sits down with the remarkable actor to discuss his career, acting in Nigeria, and the future of the Nigerian film industry.

The Nigerian movie industry is undoubtedly the biggest in Africa, and it’s also among the top movie industries in the world. One of the key factors of Nollywood growth, in my opinion is the distribution deals with Western streaming services. Now a lot of people can watch Nollywood films anywhere in the world.

It started by being a commercial model and working with numerous notable brands. I had an unwavering passion for the entertainment industry and decided to go for training at the City Varsity School of Media and Arts in South Africa, where I acquired intelligible skills in filmdom. So, I rocketed onto the film industry; I was featured in The Men’s Club, Royal Castle, the legacy which was my first Pan – African movie feature, From Lagos with love, and many more. People don’t know that I am a good cook! Husband material 1000 yards, lol 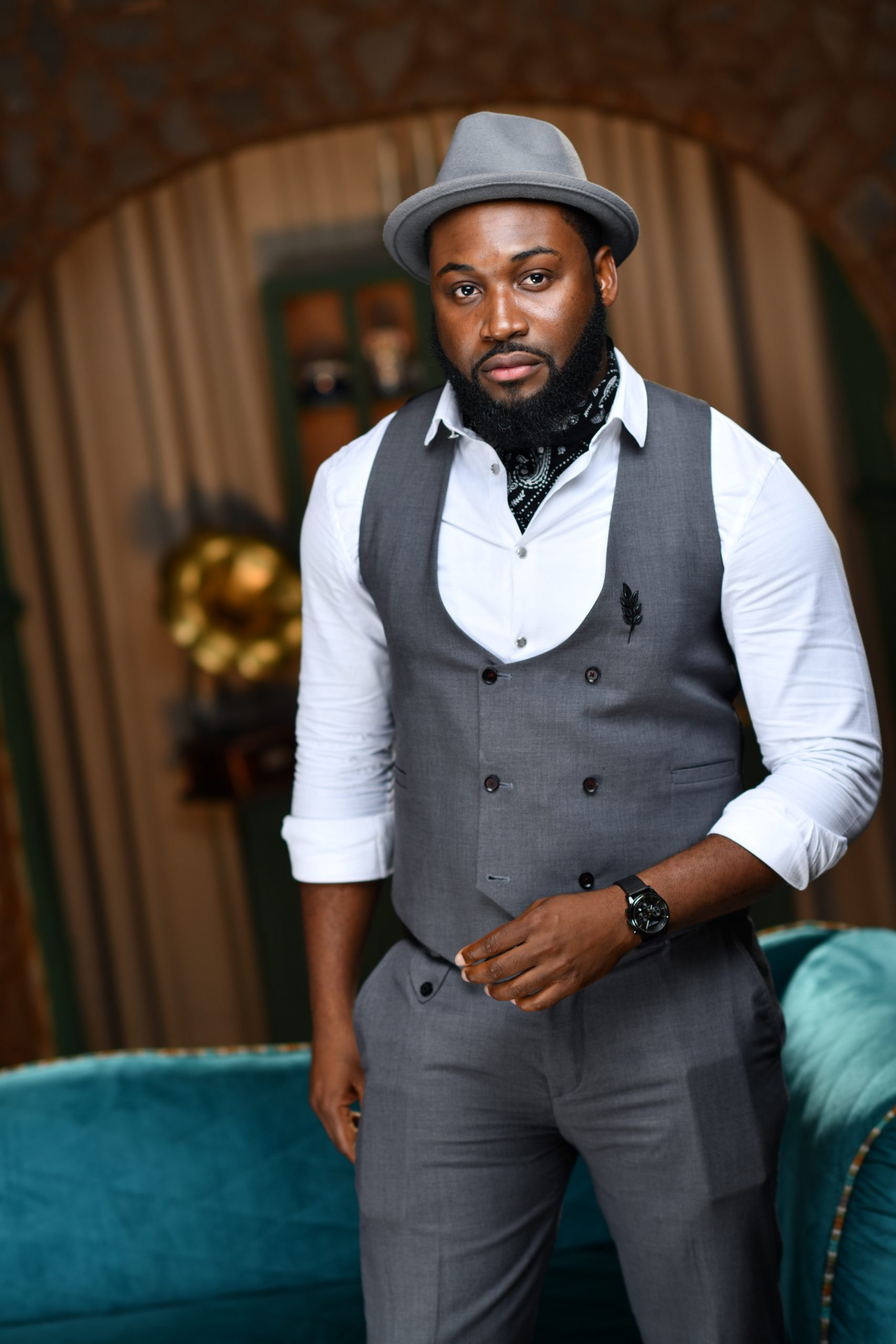 There were no challenges; my mum bought my modelling form back then. My dad was sceptical, though, but later supported me with regular transportation to modelling auditions.

I consider every role a big one because of the opportunity given. I mean, we have a bunch of creative actors in Nigeria.

The best way to be finetuned in any industry is to first observe other people and read as much as you can. Listen to your surroundings, watch as much as possible and have a life outside of that industry.

The Nigerian creative sector is growing by the day, and in the next 5 years, I am certain that the creative industry can potentially create more than 3 million jobs in the next 5 years. From music, movies, fashion, tech and the likes, the industry will add to the country’s revenue and growth.

So, every year, we set out to feed the less privileged, and this year’s outreach was one for the books. We fed at least 800 inmate prisoners at the Ikoyi prison; it was an interesting time as well as a sad one, listening to different stories of the inmate; most of them claim they were innocent. Imagine a prison with a capacity of 1,000 – 1,500 inmates max, with almost 2,700 inmates; the rooms aren’t even enough for them. Another shocking thing I discovered was that only 600 inmates had been confirmed guilty the rest of them are awaiting trial. It is sad, I must confess, but we could only do our best, fed the few we could, prayed with them and gave them some words of encouragement. We also donated a few books to their library because some prisoners are in school, and some are planning to write exams.

“I Am Speechless”: Iyabo Ojo’s Daughter Priscilla Stunned As ‘Obsessed’ Lover Tattoos Her Name on His Hand

Why I must marry from Abeokuta- Bimbo Akisanya spills

Nollywood actress Bimbo Akisanya has sent a message to her potential suitors on the criteria she will be looking out for in her man.

The Yoruba actress who has been beamoning her single status for the past weeks took to her Instagram page to reveal the particular tribe she would be picking her suitor from.

According to her, she would only marry a man who is from Abeokuta.

Her reason is that, Abeokuta men are very romantic. To prove her point, Bimbo posted a WhatsApp screenshot of a potential suitor eulogising her in his dialect.

The actress added that she woke up to his romantic gesture and this has changed her mindset on the type of man she wants.

“So sweet waking up to this, I must marry omo Abeokuta this time around abi bawo????”.

Bimbo Akisanya had sent a strong message to her future husband as she bragged about her latest win over a man.

The mother of one shared a video of herself enjoying her favourite game, table tennis, while she boasted of her win over her partner, who was, unfortunately, a man.

Sharing the video on her Instagram page, Bimbo Akisanya urged her future husband to ensure that there was table tennis in their house.

She wrote: Table tennis, my best game ever
And of course, I won. I won a man
Dear future husband, please make sure there’s table tennis in the house.

Sola Sobowale: I have never acted in a movie as big as KOB
Toyin Abraham’s stepdaughter celebrates her birthday with a heartwarming message
Actor Okiki Afolayan leaves many gushing as he adores his beautiful wife, Bimbo Afolayan

Nollywood actress and mother of two, Adunni Ade, has penned a heartfelt to celebrate her son, D’marion’s 15th birthday today, the 26th of August 2022.

Adunni Ade, proud of her boy, shared lovely throwback photos on her Instagram page. The photos comprise beautiful moments between herself and her first son.

Sharing the photos online, Adunni Ade expressed herself in a letter about how joyful she is to celebrate her son’s 15th birthday. She revealed that her heart is gladdened to watch her son grow into maturity.

The mother of two boys also showered prayers on her boy, wishing him to be blessed in every way possible.

She wrote: “My heart is filled with so much Joy and Happiness, D’marion, as I celebrate with you on your 15th Birthday.
“You are an amazing son, my heart gladdens daily of the young man you’re growing into. I am most grateful for all the special moments we’ve shared together, and I am looking forward to more happy memories we will make in the years to come. May your walk and path of Life be blessed in every way possible. May God’s Will be your portion.
“May today be a day filled with all the things that make you happy, especially your books 😂😂 @dmanyoung
Love Mom ❤️.”

Adunni Ade marked her 46th birthday with jaw-dropping photos and a touching tribute to herself.

The beautiful actress appreciated God for making her live to celebrate her birthday. She revealed how she had managed to stay strong despite her trials.

She wrote: “Many many years ago, God you have me a life that day I was born, and I hope I will send all my life and do as much as I can show you my love and gratitude. This past year has proven how strong-hearted I am and that I can conquer whatever I put my mind to.

I am a living testimony of perseverance! Countless sleepless nights, so many nights of tears, being aches and pains, wondered if I’d see another day! Lost my younger brother (God bless your soul Douglas). Oh! The time I stepped into the big girl shoes, executively produced my first movie. A budget of N34m but ended up spending almost N50m. Humm! Story for another day! I promoted the movie like my depended on it! Well, it did! I had casts who f’ed me over upon all the contracts signed but like I said, story for another day! With all my push, my sweat! I scaled through, and my movie ranked 9th biggest movie in the country! On my first try? God is the greatest!

I have got to add this to those who randomly showed so much love to me, thank you! To those who intentionally tried to kill my joy, thank you! You made me push harder coz I don’t accept defeat! Look I say this often because I live and breathe by this! For as long as you’ve got life, you’ve got hope! Do not be intimidated to accepting fear and defeat! Stand strong and go forth to achieve greatness. What more can I ask for? I’ve got the best children and family members. A few great friends and my beautiful family. Without you, I’m no one. We go hard this new year”.

Who can help me with divorce papers?! Hilda Dokubo cries out

Veteran actress Hilda Dokubo has lamented over how stressful a divorce process takes.

The actress via Instagram hours ago, pleaded for help on how to file the divorce from her on-screen husband, Bimbo Manuel, as she complained about the judge’s nonchalant behavior.

Sharing a photo of her and the actor, the light-skinned actress noted how she has starred as his wife in several movies and wanted a change.

“I have married this @manuelbimbo too much, please who can help me with divorce papers? This judge is doing anyhow…me I am too happy enjoying the sweetness inside”.

Joke Silva who was left speechless with her move left a comment on her page.

Years back, Hilda Dokubo opened up on reconciliation with her husband.

The actress stated that as a Christian, she should be able to forgive and live a life that Christ would be proud of.

Hilda added that she did it for herself, her children, others, and most importantly God.

Hilda Dokubo said, “Everything in life has stages and time. If I say I’m a Christian and love God, then I should be able to live a life that Christ would be proud of. It doesn’t matter who is right or wrong in a relationship. We did it for ourselves, our children, others, but most importantly for God”.

Speaking on the lessons she learned about marriage, Hilda said, “Patience. Don’t think anyone else can help you build your home, because you alone can do that. Don’t give up so quickly when it becomes so tough.
Hilda Dokubo to divorce husband